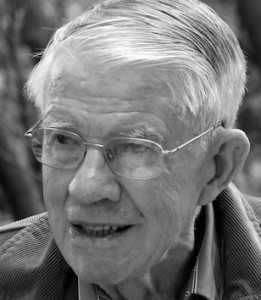 Rev. Dr. John Garrett was a Uniting Church minister, historian, teacher, and author.   In 2007 he founded The Garrett Riggleman Trust to perpetuate the memory of his father Allen G. Garrett and father-in-law Leonard Riggleman.  The Trust invests the financial legacy of the Garrett and Riggleman families for the benefit of the common good.

Born in 1920, John Garrett was ordained in 1946 and lived a rich life of ministry, scholarship, teaching, and dedication to Christian unity, in the worldwide mission of the Church. He served the ecumenical movement as the first General Secretary of the Australian Council of Churches (now the National Council of Churches) and later as the Communications Director of the World Council of Churches in Geneva. He was principal of Camden College, a theological seminary in Sydney, and taught church history at the Pacific Theological College in Suva, Fiji, where he lived from 1968 until his return to Australia in the 1990s. He died in April, 2011 after a short illness surrounded by family and loved ones.

John Garrett was the author of several books and numerous articles. He demonstrated the vital role of Pacific Islanders in the spread of Christianity throughout the Pacific in a work in three volumes beginning with To Live Among the Stars, a book which was described as a “standard for a generation”.

Married twice – to Dorothy Scott-Orr who died in 1958, and then to Roberta Riggleman, who died in 1987 – he was a loving and greatly-loved father, father-in-law, grandfather, great-grandfather and uncle. He is remembered by a host of friends throughout the world and especially in Fiji and the Pacific Islands.